The Red Dragon’s plans for India

China’s aggressive strategic posture in Asia indicates that China has given up Deng Xiaoping’s advice to “hide your capabilities and bide your time.” In South Asia, China is clearly engaged in a carefully thought through and meticulously orchestrated policy aimed at the strategic encirclement of India.

China’s nuclear warhead and missile technology nexus with Pakistan has been meticulously documented by several international experts. By giving Pakistan nuclear warhead technology and highly enriched uranium, by gifting fully assembled M-9 and M-11 ballistic missiles to Pakistan and by blessing North Korea’s transfer of No Dong and Taepo Dong missiles to Pakistan, China has irrevocably changed the geo-strategic equation in South Asia by propping up Pakistan as a challenger to India.

The “all-weather” friendship between China and Pakistan is, in Chinese President Hu Jintao’s words, “higher than the mountains and deeper than the oceans”. Under a treaty of “Friendship, Cooperation and Good Neighbourly Relations”, signed during Premier Wen Jiabao’s 2005 tour, China has guaranteed Pakistan’s territorial integrity. Had it not been for the cover provided by its nuclear shield, an internally unstable and economically failing Pakistan would have been in no position to wage a proxy war against India in Jammu and Kashmir through its mercenary terrorists. 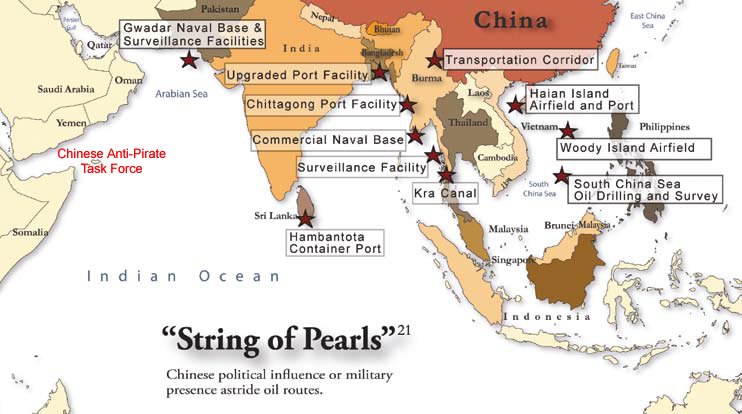 China’s deep inroads into Myanmar and support for its military regime; its hobnobbing with the Maoists in Nepal; its covert assistance to the now defunct LTTE in Sri Lanka; its attempts to isolate India in the ASEAN Regional Forum (ARF) while keeping India out of the Shanghai Cooperation Organisation (SCO); and, its relentless efforts to increase its influence in Bangladesh and the Maldives are all areas of major concern for India. China’s efforts to develop port facilities in Myanmar (Hanggyi), Bangladesh (Chittagong), Sri Lanka (Hambantota), and at Gwadar (Pakistan) are part of a “string of pearls” strategy to dominate the northern Indian Ocean region around 2015-20.

China refuses to discuss nuclear confidence building measures (CBMs) and nuclear risk reduction measures (NRRMs) with India on the grounds that India is not a nuclear weapons state recognised by the NPT. The unstable security relationship and lack of progress on the resolution of the territorial dispute could result in these Asian giants clashing in future rather than cooperating for mutual gains.

India-China strategic relationship is stable at the strategic level, but it is marked

Prime Minister Manmohan Singh rarely speaks his mind on the major issues of the day. However, on June 29, 2011, in his…

Two years ago, on Thanksgiving, as American families sat down to dinner, their TV screens came to life with a macabre spectacle….

In the 2011 Union Budget presented yesterday in the Indian Parliament, the Finance Minister announced an 11% hike in the defense budget…

Why India must try to bring the United States, Iran and Russia together over Afghanistan Imagine Afghanistan without extra-regional powers like the…

From the point of view of international peace and stability, 2010 ended on a positive note with the ratification by the U.S….

In an identity of opinion more typical of North Korea than of the US, “expert” opinion in the Beltway has been near-unanimous…