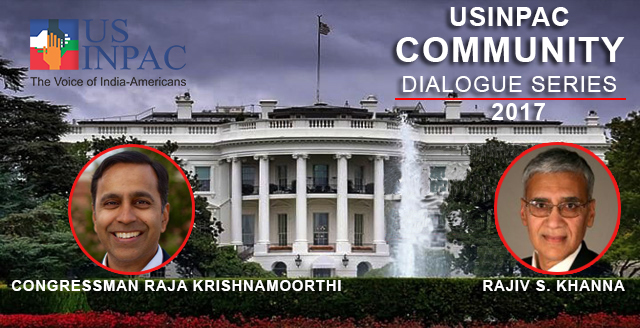 Asked about the Trump Administration positions around H1B visa and family immigration, Congressman Krishnamoorthi remarked that though America is a country of laws it is also a country of immigrants. There is a shortage of skilled labor, reform is needed to attract highly professional taskforce that is vital to grow our economy. In a hostile immigration environment, the IT Companies will move jobs offshore. Skilled immigration should figure in the talks between Prime Minister Modi and President Trump to be held in June. Congressman Krishnamoorthi did not think H1B visa program is to blame for massive US unemployment, as unemployment is at a historic low, the House just passed a rewrite of the Perkin’s Act on career and technical education for building a skilled workforce for the 21st century. Regarding worker shortage in the Silicon Valley, the Congressman remarked if President Trump wants to grow the US economy at 3-4%, immigration reform must not be reckless, should not fail to retain and attract high tech workers in AI and Big Data. Well known immigration expert Khanna suggested a detailed economic, statistical and legal bipartisan study on the effects and benefits of the H1B program to close the gap between perception and reality. Krishnamoorthi agreed, the study would guide us on how to grow our talent pool. Krishnamoorthi has co-sponsored the abolition of per country caps for H1B visa, favors both skill based and family immigration. Rajiv Khanna voiced the gap on readiness between the US Government and the real world, and encouraged USINPAC to drum up support for effective immigration reform.

Sanjay Puri, Chairman of USINPAC, said, “I thank Congressman Krishnamoorthi and Rajiv Khanna for engaging with us, on issues vital to the Indian American community. We look forward to more conversations on this topic with you.”

Link to the Community dialogue series on immigration:  https://youtu.be/FPktu-6zC4U

The US India Political Action Committee (USINPAC) is the voice of over 3.2 million Indian- Americans and works on issues that concern the community. It supports candidates for local, state and federal office and encourages political participation by the Indian- American community. Visit www.usinpac.com  for more details.