China is Emerging as a Water Hegemon in Asia

A crisis of gargantuan proportions with unprecedented geo-political repercussions is gradually taking shape in Asia. Tibet is the source of several large Asian rivers. The Indus River with its source in Tibet flows through India and Pakistan; the Brahmaputra (known as the Yarlung Tsangpo in Tibet) flows from Tibet through India and Bangladesh; and, the Sutlej flows through India into Pakistan. From its source in Tibet, the Salween enters Yunnan in China and then flows through Myanmar, finally forming the border between Myanmar and Thailand. Originating on the Tibetan Plateau, the Mekong River, which is the heart and soul of mainland Southeast Asia, flows through Yunnan, Laos, Cambodia and Vietnam. Similarly, the Amur, Illy, and Irtysh rivers flow through Russia and Central Asia.

Amazingly, contrary to good international practices, as the upper riparian state with physical possession of the headwaters of Asia’s major rivers, China has not entered into equitable international agreements with any of the lower riparian states the lives and livelihood of whose people depend on the uninterrupted flow of these rivers. And, to confound matters even further, news reports keep surfacing with alarming regularity about China’s plans to divert the waters of some of these rivers to make up for the declining water levels in the rapidly drying up rivers in the heartland of China. These include the Yangtze River, which too originates in Tibet, and the Huang He (formerly Howang Ho or Yellow River, also called ‘China’s Sorrow’). 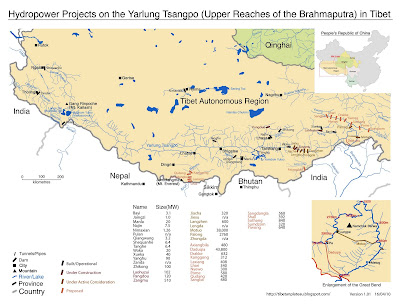 According to Indian analyst Brahma Chellaney, “China rejects the very notion of water sharing or institutionalised cooperation with downriver countries… Whereas riparian neighbours in Southeast and South Asia are bound by water pacts that they have negotiated between themselves, China does not have a single water treaty with any co-riparian country.” Only recently China has begun to selectively share ‘flow statistics’ with the lower riparians. However, Chellaney is of the view that “these are not agreements to cooperate on shared resources, but rather commercial accords to sell hydrological data that other upstream countries provide free to downriver states.”

China’s diabolical plans to divert the waters of the Brahmaputra and other rivers to the deficient Yangtze River along the ‘Great Western Route’, though officially denied, will cause untold misery to the downstream populations of many Asian countries, including India and Bangladesh. According to Tibetan data, 10 dams have already been completed on the Brahmaputra, three others are under construction, seven new dams are under active consideration and eight more have been proposed.

Satellite images reveal that plans are proceeding at a rapid pace to construct a 38,000 megawatt dam at Metog (Motuo in Chinese) on the Brahmaputra. The project will be double the size of the Three Gorges Dam, which has caused immense environmental damage.  This project on the ‘Great Bend’ of the river will result in a large dam with serious seismological repercussions as the Himalayas are young mountains with frequent earthquakes. China is also planning to construct a hydro-electric power project at Dadiqua. This project will exploit the natural 2,500 metres drop in the river and will not need a large dam.

Run-of-the-river projects, like the one proposed to be constructed at Dadiqua, will not materially affect the lower riparians, but large dams with plans for the diversion of water to areas on mainland China will have serious implications for the people downstream. It is in the interest of China as well as the lower riparian nations to enter into multilateral river water sharing agreements in keeping with international norms and practices. So far, China has steadfastly refused to enter into any such agreements. Contrary to its self-professed ‘peaceful rise’, China is pursuing hegemonic tendencies that are a sure recipe for instability that may ultimately lead to conflict.

Maps, MOUs and Other Contradictions

Due to the proclivity of India’s neighbours to exploit the country’s nation-building difficulties, India’s internal security challenges are inextricably linked with border…

Since the United States has announced its intentions to withdraw its troops from Afghanistan by 2014, leaders in the White House have…

It was like just another formality in the Sino-Indian relationship being fulfilled, as the Chinese Prime Minister Wen Jiabao concluded his “significant”…

Legislation that will have a positive direct impact on Indian nationals passed the House of Representatives on Tuesday, November 29. The vote…

The time has come to question why the country needs tactical nuclear forces Marking the anniversary of Pakistan’s 1998 nuclear tests, Nawaz…

0
31 May 2012
Indian Entrepreneurs Fit into an American Tradition

America is a nation of immigrants. But it is historically has been a nation of entrepreneurs. Because of geography and U.S. immigration…

From the point of view of international peace and stability, 2010 ended on a positive note with the ratification by the U.S….

The situation in Jammu & Kashmir (J&K) continues to remain a cause for concern to the government of India. Since end-1989, Pakistan…