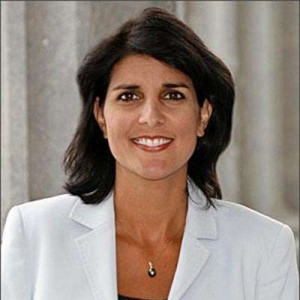 Nimrata Nikki Randhawa Haley (born January 20, 1972) is an American politician and the current Governor of South Carolina. Ms. Haley previously served in the South Carolina House of Representatives where she represented Lexington County from 2005 to 2010. She is the first Indian American Republican state legislator in the United States.One of the strongest fiscal conservatives in state government, Nikki Haley continues to earn the trust of South Carolinians through hard work, principled leadership on behalf of her constituents and an unwavering commitment to the taxpayer’s bottom line.A pro-business leader in the fight for lower taxes and less government, Nikki has fought wasteful spending at every turn during her time in Columbia, pushing for smaller, more efficient and more accountable government. In advancing reforms designed to make South Carolina more competitive, she has emerged in the House of Representatives as a true Reagan Republican,and a tireless proponent of common sense legislation designed to raise income levels, create new jobs and materially enhance your quality of life.For her efforts to cut taxes and slow the growth of government spending, Nikki was named as Friend of the Taxpayer (2005, 2009) by the S.C. Association of Taxpayers and a Taxpayer Hero (2005) by S.C. Gov. Mark Sanford. She has also received the Palmetto Leadership Award from the S.C. Policy Council for her expertise on policy matters and the Strom Thurmond Excellence in Public Service and Government Award from the S.C. Federation of Republican Women for the outstanding constituent service she provides to her district.Nikki has been an outspoken voice for added accountability and transparency in the Legislature. According to a recent study from the SC Policy Council, a non-partisan think tank, less than 5% of all legislation that passed in the General Assembly last year did so with a recorded vote. That means citizens have no way of truly knowing how their individual legislator voted on a particular issue. To ensure the most fundamental principles of representative democracy were upheld, Nikki introduced legislation that will require on the record votes for all legislation, with few exceptions, brought up on the floor of the State House.Since becoming the first GOP Indian American in the nation to win a State House seat in 2004, Nikki has been named Chairman of the Freshman Caucus (2005), and Majority Whip (2006). In 2008, Nikki was re-elected by the largest margin of any state representative with a contested general election in South Carolina.Born in Bamberg, S.C., Nikki graduated from Clemson University with a B.S. degree in accounting. Nikki currently serves on the board of directors for Mt. Horeb United Methodist Church Medmission. She is a member of the Lexington County Chamber of Commerce, Lexington Rotary Club, National Association of Women Business Owners, West Metro Republican Women, Lexington County Republican Party and the NRA.Nikki and her husband, Michael, live in Lexington and have two children, Rena, 10, and Nalin, 7. Most recently Nikki was named Friend of the Taxpayer in 2009 for her fight and success in getting more legislative votes on the record and working to make state government more transparent for the taxpayers.